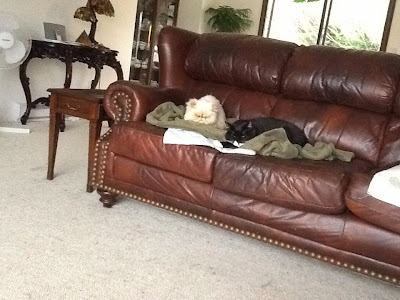 I haven't been writing very much in the blog of late. My beautiful Himalayan cat Izzy hasn't been feeling well and had lost quite a bit of weight. I have been spending a lot of time spoiling him. At midnight on Sunday night I decided to run him in to the 24 hour vet hospital to get an ultrasound. I just suddenly had a feeling. Allan thought I was nuts. I got out the crate and put it in the back and headed in for a little road trip and some peace of mind. Six hours later I drove home with my sister at my side...but no Izzy. He had cancer and his colon had a two inch tumor that was completely blocking him. If I had put him in his huge overnight crate and gone to bed, he would have had an awful night alone in pain. In hindsight I am so thankful for the little push that made me leave home in the middle of the night. I am thankful for my sister Jess who drove to town at 2 am to be with me and with Izzy when he passed.
I am thankful for my friend Cheryl Dawn a healer and shaman who called me from Hawaii that afternoon to tell me that Izzy was telling her that he wanted to go outside...mom never let's me out. True. He wanted to feel dirt on his feet. There were about 80-110km winds so I bundled him up and took him to the greenhouse so he could pad around in the dirt where it was warm. He got to be a real cat. The lettuce and big orchid that he rubbed along must have felt like a jungle. I let him just roam around for about a half hour. I intended to do this every day. It was very cold and windy, so I bundled him back up in the blanket and showed him around the yard. He was bundled like a baby with just his adorable face peeking out. He seemed so happy. It's like the universe knew that it was Izzy's last day. Izzy and I just didn't. Farewell my beautiful boy. I miss you more than I can say.
I will post a picture later, he was wicked cute. And he was a hugger. God this house is not going to be the same.
Posted by Erin at 8:24 pm

This is so touching. It brought tears to my eyes as I have now two dogs and my pet dog died (with whom I almost grew up) about 8 years ago; so I can understand the pain. We all pet lovers, our pets who are like our children to us and bring so much joy are with you now.

So sorry to hear about Izzy, but glad to know he is no longer in pain. I know you probably have endless fun stories about Izzy that you will recall with a smile in the coming months and years. Wishing you well.

Erin, hopefully you know, I know how you feel. Please, be grateful you had this time with Izzy. Sometimes Creator/God decided he wants his children home "now" and we don't get to have these moments. Love the time, lessons and moments you had. Izzy the Angel will always be there for you!

Thank you so much for your kind thoughts. Izzy was one of a kind. A gentle giant of a kitty with the sweetest, softest, kindest little spirit. He would always put his paws around your neck when you picked him up. He was beautiful. He would let you carry him for hours if you had the time!!

Erin, I'm so sorry to hear about Izzy. It's hard to lose a beloved pet.

Oh, I am so sorry.One of my boys died at 14months from the same thing. Your last day was a special time...for both of you..I'm sure Izzy knew you would need a very special memory to cherish.
Jane x

So sorry to hear about your Izzy. I think we do have intuitions that let us know what needs to be done, if we listen. So nice that Izzy had a wonderful last day.

Oh Erin...I know exactly how you're feeling after losing by beloved cat Dusty just last weekend after 18 years of companionship. Thinking of you my friend xx

So sorry for the loss of your sweet friend. Glad that you were able to spend some special time with him near the end. Izzy knew his mom was a special lady. Take care.

I am so sorry about your wonderful Izzy. It makes me think of how much I love my two little pups and I feel so sad for your loss. Keep an eye out - a friend recently had to put her beloved dog to sleep, and she said he came back (in spirit) to say goodbye.

I am deeply touched by the kind words. I feel for those of you who have lost your fur babies. It is the worst day. I am on the Big Island which is called the healing island. I do keep hearing Izzy's name as he was named after Israel Kamakawiwo'ole who is a very famous Hawaiian singer. Oh my Izzy. I love you baby boy.

Hi Erin,
I have awarded you the Versatile Blog Award. Please visit http://boonton-newjersey.blogspot.com/2012/01/holleygarden-you-have-made-my-day.html to accept it and see the rules. I hope you will do so. Thank You, KL

Your blog has been chosen by me for the for the Versatile Blogger award. I think your blog is special. I have linked to you on my “ And the Award Goes to...” post. If you want to find out how this all works go to the post on Plants and Stones and click on Donna. So sorry about Izzy.

Thank you so much for this. It means the world to me.