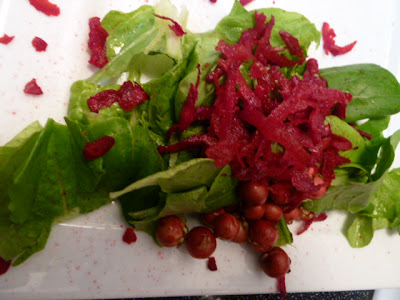 At first glance it looks like there is nothing really growing that I could make a salad with. I noticed that a few of the lettuce's in the garden were quite a decent size. I grabbed my bucket and picked some leaves. I noticed that the French Sorrel had some baby leaves coming up so I picked a few of those for punch. Went into the greenhouse and found several leaves that while tiny, were big enough to pick. I returned outside and meandered. I noticed that there were still several Chilean Guavas on the bush and they were turning whitish. They are at their sweetest when they start to have a white blush. So I added those to the bucket. Neighbor Judy had given me a few beets and I grated one up and added that. I then threw some pumpkin seeds on and Raspberry Lime dressing. It was awesome. I have really missed fresh salad.
Posted by Erin at 10:50 pm

A nice result - It's especially rewarding when you can make something good out of "not a lot". Appearance is important too, so I expect you put your salad in a suitably pretty dish.

I like to use white dishes. It makes the colors pop. So they went onto nice white square plates and then raspberry lime vinaigrette, which is quite a bright red.

Oh that would be lovely! We have different kinds of salads here, as these types are not growing favorably in our hot climes. Most of our salad vegies are grown in our highlands. Those growing in the lowlands are the cooking types.

Where are you Andrea?