I set up the Continuous Brewer for my Kombucha. I put the two jars that I had on the go into the brewer. I worked out the ratio for the tea to water for the 2 1/2 gallon brewer. I'm good to go. I feel like an alchemist. 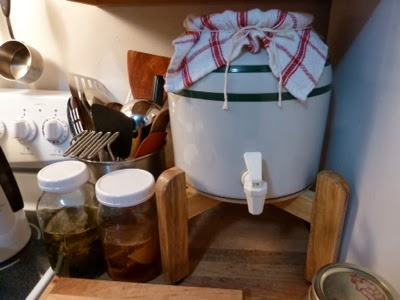 DONE!!! My brewer set up. Isn't it wonderful. To the left is my plantain infusion and SCOBY hotel. That is a jar of SCOBY's and liquid so you have SCOBY's in reserve in case a batch  molds etc. And of course to give to people starting out.

I am a research kinda girl. I have been reading about Kombucha and making batches for several months. I made my original SCOBY from a bottle of GT Kombucha unflavoured. I lost two batches to mold. Rather than getting totally disillusioned and quitting. I set about to figure it out. The only thing different from previous batches was a box of green tea I was using. I whipped up a batch with black tea and then a green/black combo. I got rid of the old box of green tea and substituted a new type. It worked just fine. I now wonder if the tea itself could have contained mold spores. My cleaning was impeccable, so I knew it wasn't that. So Kombucha back on track and I had two half gallon jars on the go at all times. I did the second fermentation and managed to get fizz. Then I started adding raw ginger and I was hooked.
So back to research. I started reading about the continuous brewing system. The Kombucha goes into a large vessel with a spigot down low. You decant out your litre for the week and top up the brew. I bought a 2 1/2 gallon porcelain crock with green stripes. So when you take out the litre, there is so much Kombucha left when you top it up, it only takes a couple days for the Kombucha to be ready instead of ten+. I set my system up last night. 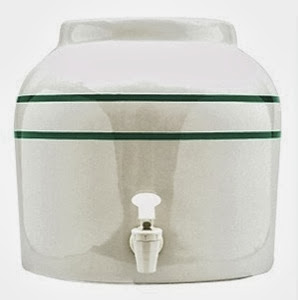