While waiting for wood chips, I'll work on the front of the house.

This is a picture of the garden at the front of the house before Mark dug it up for me. 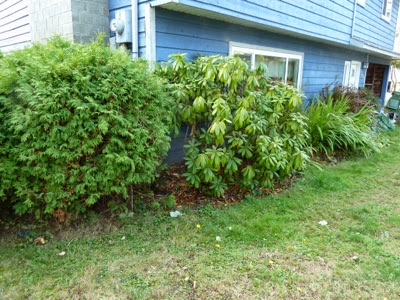 And as I'll use any excuse to put in a bobcat picture, here is Mark digging everything out of the front bed again. 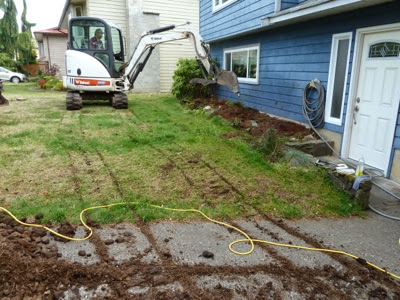 I spent all day clearing all the rocks, lumps and roots of the invasive plants like English Ivy and Creeping Jenny out of the front bed. I then smoothed it all down level again. I climbed under the Rhodo and started pruning. It is an old Rhodo and unless you got underneath and looked inside you couldn't see that there were a lot of curly scrawny branches that had been curling trying to get to the light. Branches were rubbing on each other. You know...typical old Rhodo stuff. So I gave it a real harsh haircut. There will be a lot more light coming through the tree to the right hand side where it was snuggled so close to the shrubs beside it, it was petty bare on that side. I also raised up the lower level which made it look more even instead of bare on the one side. I am really pleased with it.
With the bed temporarily empty, Amanda and I were able to get back there and scrub, and do spider removal...okay I did that cuz they creep her out. We then put her lavender bush there so it wouldn't look so bare. 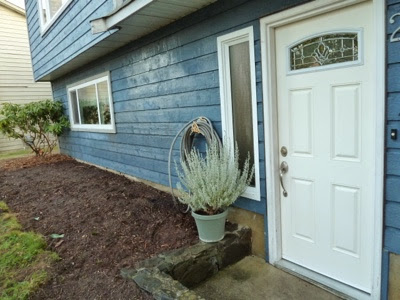 And finally a closeup of the Rhodo in its full glory. I put some wood chips under it. The bed will be full of them eventually. 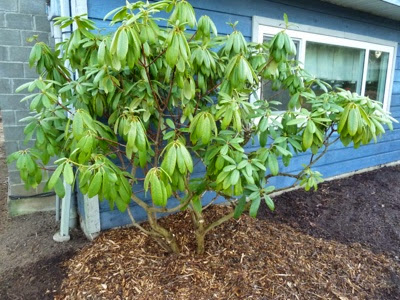 Rhodo looks great. Has a Zen quality, maybe an Asian Lantern nearby? Great job Erin. So exciting to see the change.